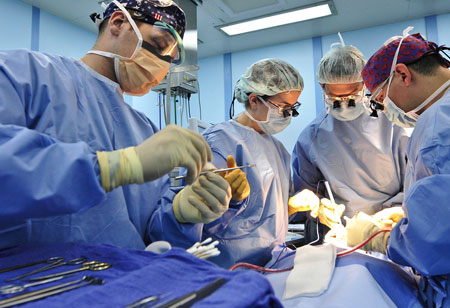 Technological advancements in the medical field are equipping the surgeons with better equipment, reducing the time taken for surgery and efforts involved.

FREMONT, CA: The medical field has achieved incredible feats in terms of technological advancements. The advancements are not only saving more lives but also aiding the staff and doctors with their processes. Automation is also gaining importance in the medical space. Numerous processes that were earlier being carried out manually are increasingly getting automated. Surgery is one such area that is gaining most from automation and technology. Here are some of the primary advancements in the surgical space.

NASA and the Skull Base Institute have jointly created a 3-D high definition endoscope with a revolving tip- Multi-Angle-Rear-Viewing Endoscopic Tool (MARVEL). The device will help the surgeons with minimally invasive surgery, while the tiny camera will allow a very accurate 3-D view of a tumor. The tool will enable the surgeons to perform surgeries with minimal chances of complications and faster recovery time for the patients.

Brain biopsy is one of the most sensitive biopsy procedures that require the utmost precision. A mishap can result in catastrophic consequences. However, with the incorporation of smart needles, the procedure is expected to become safer for patients and much simpler for the surgeons. The needles are laced with imaging technology that allows the surgeons to interact with blood vessels in the brain directly. Incidents of accidental vessel damage, which is always a risk with conventional means, can be substantially reduced with smart needles.

Although smart glass is not a new technology, it is relatively a new concept in the medical space. Some of the applications of smart glasses in the real world include video collaboration, complex manufacturing, warehousing and logistics, construction and building, and numerous virtual reality (VR) applications.

Smart surgical glasses typically comprise small computers with a head-mounted video camera and screen which can be connected over the internet. It can also be used for remote surgeries. Remote surgeries are especially useful for those parts of the world where there is a lack of trained surgeons. For instance, Google Glass-facilitated tele-proctoring between a reconstructive surgeon in the United States and a surgeon in Mozambique over six months. After the conclusion of the remotely monitored surgeries, it was reported that there was no complication in the 12 cases that were a part of the 12 surgical procedures. However, the surgeons suggested moderate visual impairment due to light over-exposure and image distortion.

In the field of medical science, AI is all set to contribute to the future of robotics with its ability to collect and analyze massive data sets. Together, AI and robotics are pushing human limitations in terms of surgery and the placement of innovative medicines.

The ultra-high-resolution will allow considering the preferred site for placing stem cells in the brain, heart, and eyes to foster regeneration. AI-powered robotic arm also removes the human limitation in terms of pain or endurance. However, they are not an alternative to a surgeon as a robotic component will always need an instructor at the helm to make sound decisions. Fully automated surgical robots are already in use for tasks such as suturing incisions. With rapid technological advancements, the future of surgical robots looks bright.

The planning phase before surgery is often undermined by the people. The preoperative plan is a critical factor that ultimately contributes to the success or failure of a surgery. Surgeons and support staff determine the optimal approaches and methods for operation, depending on the condition and requirement of the case. However, the process can be tedious and time-consuming, which can be critical for cases that require immediate care.

Using VR for visualization, along with patient imaging scans, can be used to devise the exact mapping of the surgical procedures. VR makes planning faster and in some cases, even more, successful than the conventional methods. Thus, it can save critical time, and the surgeons can quickly begin with required procedures in the operating room.

The modern operating room consists of complex sets of electrical equipment. The electrosurgical tool is one among them that uses electrical energy to perform tasks such as making incisions into cauterizing wounds. Despite being of considerable usefulness, the technology produces hazardous residuals too in the form of smoke. Thus, to counter the by-product smoke evacuation technology also needs to be deployed. Smoke pencils and other evacuation devices are quickly gaining popularity in operating rooms owing to their efficiency to counter this environmental hazard.

AR focuses on reality with a better view of the information at hand. AR puts information into eyesight as quickly as possible. Owing to the above distinctive features, AR has a huge potential in enabling surgeons to become more efficient at surgeries. While the surgeons are performing a minimally invasive operation, AR can lace them with an improved view of the area that requires attention.

Thus, the AR market is booming, with players emerging increasingly in the field. For instance, one of the firms designed software that tests the feasibility of using AR to develop 3-D reconstructions of tumors. The image reconstruction technology allows a surgeon with a better X-ray view without the risk of getting exposed to any radiation.

Various other medical advancements will change the future of medical practices. However, their incorporation would depend on their cost-effectiveness and the willingness of the hospitals to adopt them. vTail: Bridging the Gap between Healthcare Professionals and Medical Representatives Five Innovations that will Revolutionize Healthcare in 2022